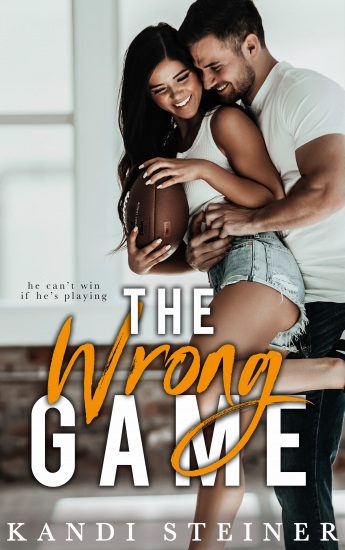 The plan is simple: a brand new, hot, preferably funny, definitely single male will fill one of those seats for every Bears game at Soldier Field. And I’ll fill the other.

I can’t think of a better way to use the season passes I’d bought for my ex-husband. I am a woman of plans, and this one’s foolproof.

Until Zach Bowen offers to be my practice round.

He’s infuriating. Presumptuous and overbearing. And absolutely, undeniably gorgeous. Any woman with a heartbeat would be attracted to him, and mine picks up speed every time he speaks.

But as I said, I’m a woman of plans — and I’m not backing down on this one.

One night. One game. And then, his time’s up.

He can try to change the rules, but here’s the truth: he can’t win if he’s playing the wrong game.

Oh the feels, the swoon, the sizzling sexiness! Kandi Steiner scored a TOUCHDOWN with The Wrong Game. It was everything I wanted to read and so much more. A 5 star favorite that will definitely be on my TOP READS OF 2018 list!

The chemistry between these two ripped up the pages, and stole my heart along the way.

The characters are real people living in the “realness” of relationships, fighting for love in the “game” of life. This is Steiner’s brilliance as a romance writer. She uses words to build relationships that are meaningful and real. While her title is The Wrong Game, it is definitely the right read at the right time. And this professor HIGHLY recommends it.